The showcase is known for creating special memories—both for the dancer and for their family and friends.  It is a sentimental moment in time for many parents, watching their child perform in front of an audience!  For many of our dance families at Kick Performing Arts, it marks the closure of one year’s journey in dance and “sets the stage” for the next.

After the showcase, costumes become special mementos, programs become keepsakes, photos become facebook posts, and our free digital download of the show often become your household’s most-watched entertainment!  The time may have passed, but the souvenirs remain … along with the personal growth each student has achieved.

One comment we often hear from parents after the showcase is how their child won’t stop talking about it!  The excitement lifts them up long after the curtain has come down.  We love hearing about this kind of enthusiasm, and we hope you’ll keep the dance conversation going at home.  This is an excellent time to listen to what your child has to say about what they liked best or what was challenging.  Being able to reflect on the experience and communicate that to others is another awesome skill to develop!

Sometimes the memories made at showcase aren’t the ones you’d expect.  Maybe your dancer became distracted at one point onstage and made a silly face that made everyone laugh, or maybe they forgot a step during the dance and seemed discouraged.  Live performances can be a little unpredictable like this, but with a growth mindset, you and your child can still choose to see the positive outcome.  Like how that silly face was sweet and entertaining, and grandma loved it.  Or that forgotten step?  What a way to show perseverance!

The lifetime memories made at the showcase enrich our students’ knowledge and understanding of what a performance encompasses.  They create context for other performing opportunities, such as in theater or music, and they build the kind of confidence only experience can deliver.

Performing onstage is an incredible opportunity for dancers to share what they have been learning in class, and to showcase their progress from the beginning of the year to the end.  Learning how to dance is a gradual process, and some skills take years to fully master—but however big or small the steps are, it is a major accomplishment for anyone to perform in front of hundreds of people!  All the hard work is worthwhile when a dancer experiences the high fives and smiles and congratulations that the recital brings from classmates, family, and friends.

Whether it’s a young dancer performing for their first time or a teen dancer showcasing years of training, performance day achievements are incredibly special to celebrate.  Lifelong memories are made from those achievements—and for many dancers, a true passion for dance is ignited! 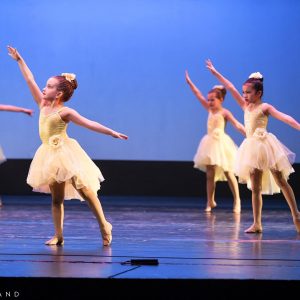 Summer is just around the corner and here at Kick Performing Arts we are super excited about all our fantastic summer program offerings!

With the current dance season winding down and the new season ramping up, you might have been wondering lately if summer dance classes are right for your child. From our experience, every student has the potential to hit their “summer stride” … in other words, they all have the ability to keep their learning power going in the summer, without losing any momentum!

We believe there is a unique benefit for each and every student who dances with us in the summer, whether it’s during a weekly class, a dance camp, or an intensive. Read on to see which advantages might be in store for your child!

Making Progress
Because dance is built on muscle memory, summer study can help your child fine-tune their movement vocabulary and technique, allowing them to improve their skills, grow stronger, and be better prepared to take on new material.  With so much more available time, we see our dancers make huge progress each summer!

Being Consistent
Young children do well with stability in their routine, so maintaining that normalcy with summer dance can give them (and you!) peace of mind, even as the rest of your summer plans may vary.  For our older dancers the consistency allows them to stay strong all summer long!!

Getting Motivated
After the showcase, we find that some students are eager to try a new dance style (usually something they were inspired by!) to see how they like it. Summer is THE perfect time to test out those new interests, without a long commitment.

Gaining Confidence
Our summer programs, with their blend of both structure and fun, can give your child the boost they need to jump into fall classes feeling good about themselves. There’s nothing quite like the personal development that can be built in the summer!

It’s part of our mission to ensure that your child is learning how to balance their hard work with time off, and the summer offers the best of both worlds. We encourage all of our students to make time for rest and relaxation, and also make time to keep their bodies strong and minds engaged. This balance is what the true summer stride is all about!

There’s something for everyone here this summer at Kick Performing Arts. We’re happy to help you customize the right schedule for your family or make a special recommendation for your child … just ask! 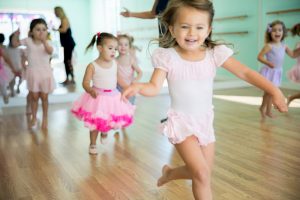 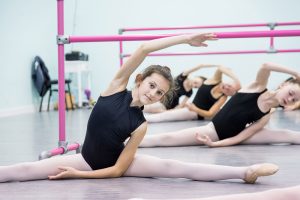 Sadie and Madeleine’s giggles are infectious. When you hear them, you can’t help but smile. But as quickly as they start, those giggles turn into a serious discussion about dancing.

Sadie Berry and Madeleine Ganun are the best of friends, and dancing is probably their strongest bond. 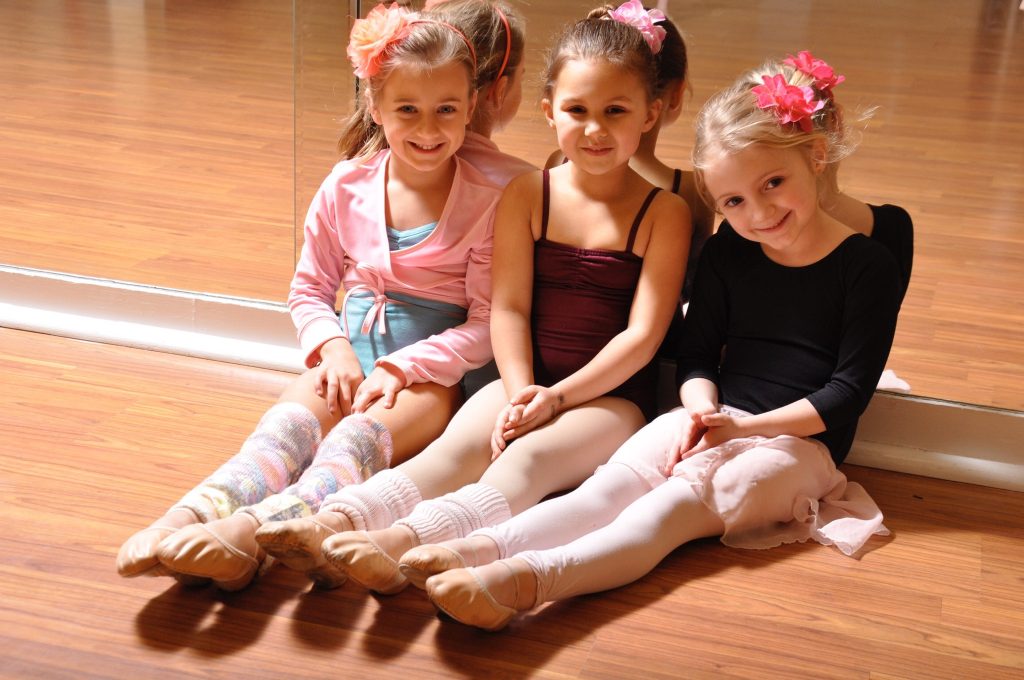 The two have been bffs since kindergarten, but they were dancing together long before they met.

But when it comes to their roles at Kick Dance Studios, Sadie, 10, and Madeleine, 11, are more than just dancers and friends. They’re role models.

“They both take the time to care about the younger dancers at Kick,” said Vanessa Berry, Sadie’s mom and owner of Kick Dance Studios. “They are always ready to help out with camps and assist the little ones backstage.”

And Madeleine and Sadie relish their role model status.

“It makes us feel grown up,” said Sadie. ‘We like to help out the little girls and we can do it because we were little once too.”

“It feels good to know that the younger girls look up to us and think we’re good dancers,” said Madeleine.

Sadie and Madeleine are so close that they even like the same kinds of dances — jazz and acro. 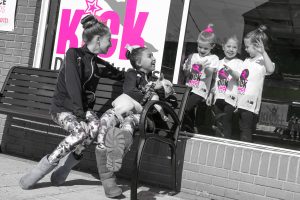 But, the two do more than dance together. They play tennis, have sleepovers, and even take vacations together, the most recent one to Florida to see their families.

“It’s better than having just your brother there,” the two said.

And speaking of brothers, even their brothers are best friends.

And their mothers too.

“My favorite thing about Sadie is that she’s really nice and a really good dancer,” said Madeleine.

“My favorite thing about Madeleine is that she’s a good dancer and she’s very loyal,” said Sadie.

Our favorite thing about the two is their dedication to dance and their caring and helpful attitudes when it comes to being great role models for younger Kick dancers.

“They have similar interests but different strengths,” said Vanessa. “They have such determination and they both work so hard to be great dancers.”

Sadie and Madeleine know how to have fun with each other, but they also know when to buckle down and dance. And when to lend a helping hand.

Drive to improve. Drive to be the best. Drive to learn. To master technique. To achieve goals.

Grace Lehman is driven. And actually, driven may be an understatement.

At 14, Grace was a competitive gymnast, contending at a very high level. Then something clicked in her brain. She wanted to dance.

And dance she did.

Ten months later, at 15, Grace is taking tap, lyrical, hip hop, ballet, acro, jazz, and contemporary dance. She made Team Kick and takes solo classes. Oh, and she made the diamond plus team, the elite team at Kick Dance Studios.

All less than a year after she began taking dance.

But what made her want to leave her comfort zone and a life of gymnastics, everything she has always known and excelled at, to give dance a shot?

“I just didn’t have the spark in me to do gymnastics anymore,” said Grace. “I achieved what I wanted to achieve.”

When Grace told her mom, Meridith, that she wanted to switch to dance, her mom wasn’t surprised.

“She really enjoyed the competitions ing ymnastics,” said Meridith. “Then her focus changed and she was ready for the next big thing in her life.”

So Grace made the move to dance.

When she was 3, Grace took one dance class with Vanessa Berry, owner of Kick Dance Studios. So when her daughter was determined to dance, Meridith immediately turned to Vanessa for advice and guidance.

“I talked with Vanessa before Grace started last year and I told her she wanted to dance,” said Meridith. “Vanessa was open to it although starting dance as a teen can have its struggles. I knew knowing Grace that if someone would give her a chance, she would take it.”

Vanessa herself began dancing at an older age so she understood how difficult it was to make the transition. In Grace, Vanessa saw a familiar passion and drive to dance.

“Because I started dancing when I was 13, I understood the challenges Grace would face,” said Vanessa. “In Grace I saw extreme passion and dedication.”

Grace practices and practices some more. She stays up late perfecting her technique.

“She has to do it right,” said Meridith. “She has this ability to make corrections and go back out and do the dance correctly. If she has a bad performance, she bounces right back.”

At her first competition, Grace received a high score for her solo performance. Remember, this is a young girl who had just started dancing and performing.

“Vanessa gave me the chance to dance. She’s the reason I’m achieving my goals,” said Grace.

Making the diamond plus team was a pivotal moment in Grace’s young life.

“It was my ‘ahhh’ moment,” said Grace. “It was so satisfying. Everything was official.”

Meridith sees a change in Grace since she began her dance journey. She’s a young girl who is learning life skills, something that is extremely important to mom. “It’s about setting goals, following through, making friends with people who have the same aspirations,” said Meridith. “It’s about discipline, commitment and learning. And especially as a young woman, it’s about developing power and strength.”

But Meridith has also noticed a more grown up Grace.

“She’s great at taking constructive criticism and overcoming some of the subjectiveness of dance. But most of all she’s following her dream,” said Meridith.

For Grace, dance is also about getting to satisfy her many different sides. “Dancing brings out all my sides,” said Grace. “I have a pretty side, a jazzy side, a musical theater side, and a tumbling side.”

But there’s also a much more powerful reason Grace is dancing. Once you start talking to her, you feel her emotions come through and understand that dance is a passion passed on to her.

Her cousin Sammy was a dancer. Sammy passed away from osteosarcoma when she was just 9-years-old, and through it all — a leg amputation and many treatments — she danced.

“Sammy is my inspiration to dance,” said Grace. And Grace is honoring Sammy in her solo this year with the song Somewhere Over the Rainbow, Sammy’s favorite song.

Grace has never had a single regret about giving up gymnastics for dance. Her commitment, her ambition, and her drive to be the best have made her a strong Kick Dancer and inspiration for so many others.  Her mother, instructors and friends are all touched by her dance.

And we know Sammy is watching and smiling from above.